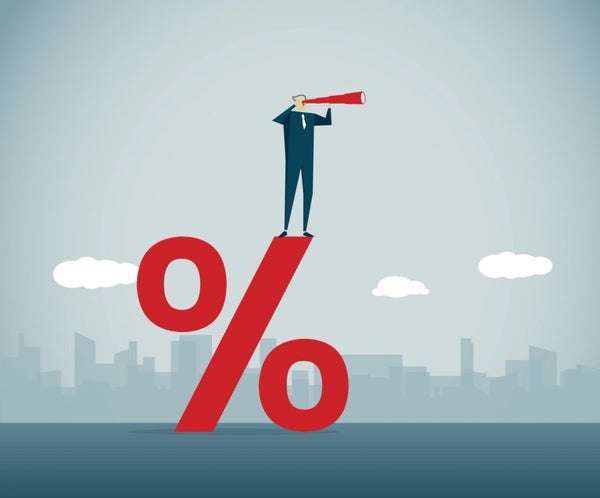 Volatility continued in the Canadian mortgage market over the third quarter. Financial markets are currently digesting a complex economic environment as still high, though perhaps peaking, inflation collides with anxiety over a potential recession. That anxiety has expressed itself as volatility across Canadian bond markets with yields on Canadian government debt plunging before rapidly recovering in the second half of August. However, the Canadian yield curve has inverted as the level of long-term interest rates is now lower than short-term rates, a situation that in the past has heralded at least a slowdown in the Canadian economy, if not outright recession.
Five-year bond yields briefly declined through July, only to once again recover their previous 2022 highs as still rising core inflation prompted a reversal in expectations for monetary policy. Those expectations were solidified when the Bank of Canada raised rates by 75 basis points at its September meeting, signalling further rate increases to come. Despite the volatility in government bond yields, five-year fixed mortgage rates have remained relatively placid. We anticipate that five-year fixed mortgage rates will hover around 5.3 per cent for the remainder of the year, with the possibility of falling should recession fears amplify next year. Canadian variable rates are expected to increase to 5.55 per cent in the fourth quarter as the Bank of Canada continues its tightening cycle. However, we do anticipate some monetary easing by the end of 2023 as the Bank of Canada adjusts to a slowing economy 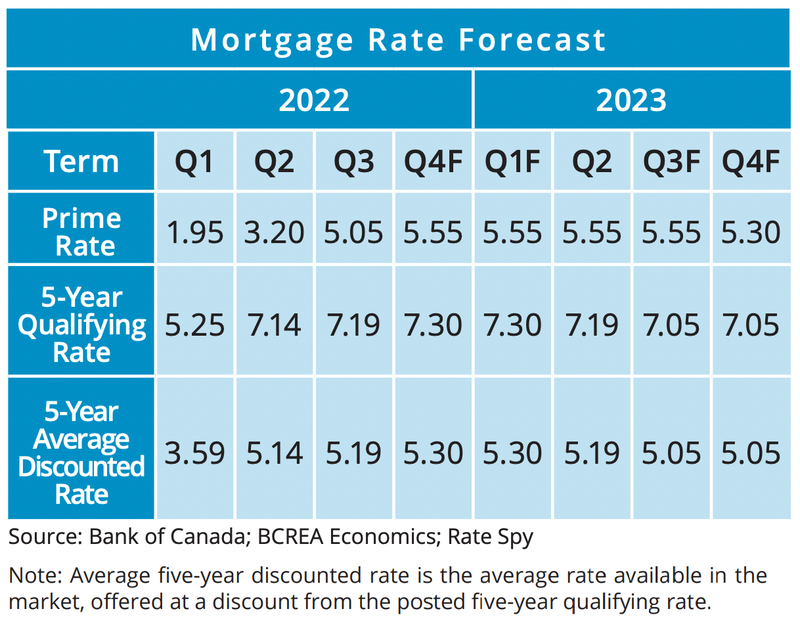 Growth in the second quarter of 2022 registered 3.3 per cent at an annualized rate from the prior quarter, with real GDP rising for the fourth consecutive month. GDP growth in the second quarter, though still strong, is showing signs of slowing. Growth was lower than the Bank of Canada’s expectations and likely contracted slightly in July. The Canadian unemployment rate has ticked higher in recent months as job growth in Canada turned negative.

The Canadian labour market has shed about 115,000 jobs over the past three months, a potential sign the economy is slowing. That slowdown will likely continue, particularly in interest rate-sensitive sectors like housing, as the Bank forges ahead with its tightening cycle. Still, the Canadian economy is set to grow about 3 per cent in 2022. The bulk of the projected slowdown is likely to appear in early- to mid-2023 as higher interest rates constrain broad economic activity. By then, we should see at least some relief on inflation as the impact of high gas prices fades, supply chains are finally healed and higher interest rates reduce excess demand. That said, inflation has proved to be quite persistent over the past year and shows signs of more broad-based price pressure.

The overnight rate is now above the Bank’s estimate of “neutral,” or the level of its policy rate at which inflation should run at 2 per cent and the economy is operating at full capacity.

How much further the Bank will go and how long rates will stay above neutral depends entirely on the trajectory of inflation going forward. We expect the Bank will raise its policy rate at least one more time this year, ultimately settling between 3.5 and 3.75 per cent.

The big question for the Canadian economy over the next year is whether the Bank of Canada can engineer a soft landing. In our model simulations, the answer to that question is that it’s possible, but it will take a bit of luck. There is a plausible path for interest rates that would bring inflation back to target while also paring back excess demand just enough without slowing the economy to the point of tipping into a recession. That path would see the Bank’s policy rate plateau at 3.75 per cent before coming down to 2.5 per cent by 2025. However, it being plausible in a model setting does not necessarily translate to possible in practice. Over the past nearly 100 years, each time inflation has spiked it has taken a recession to bring it back down. 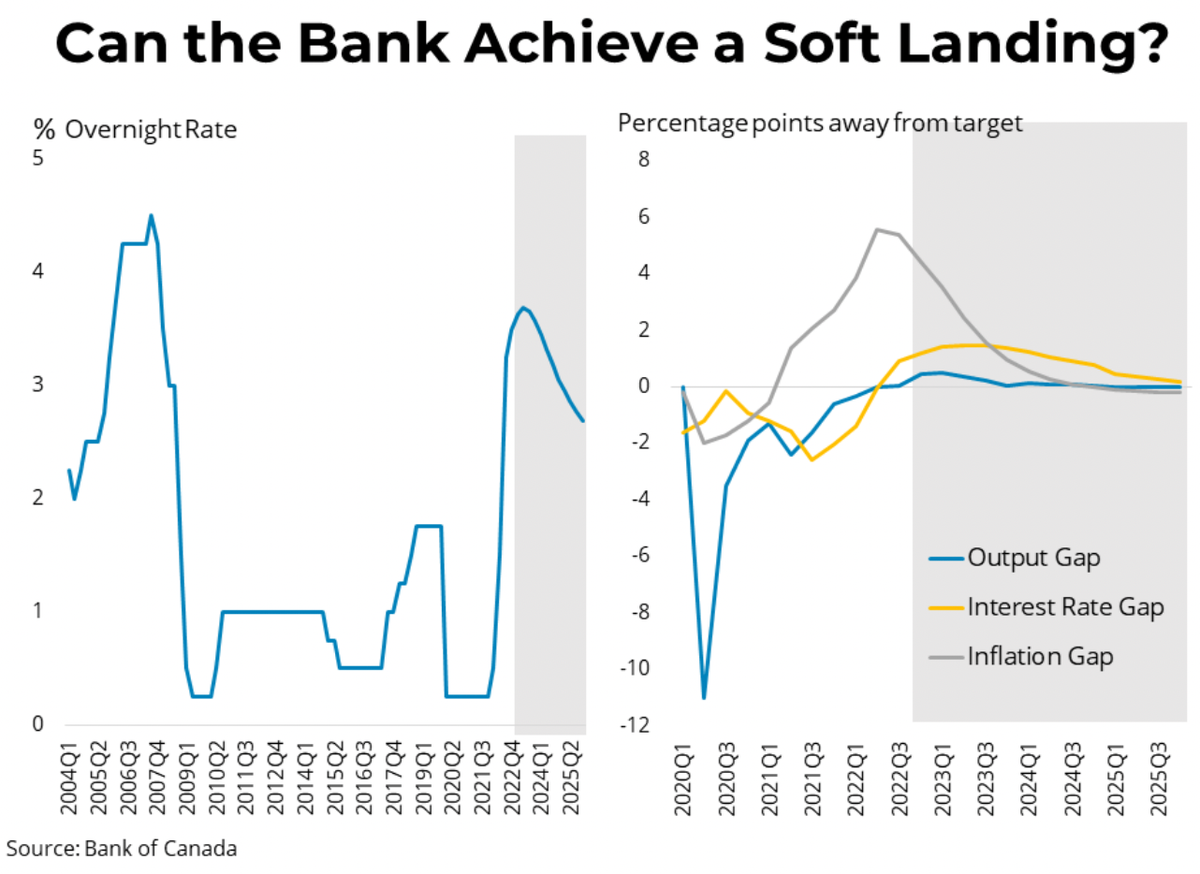 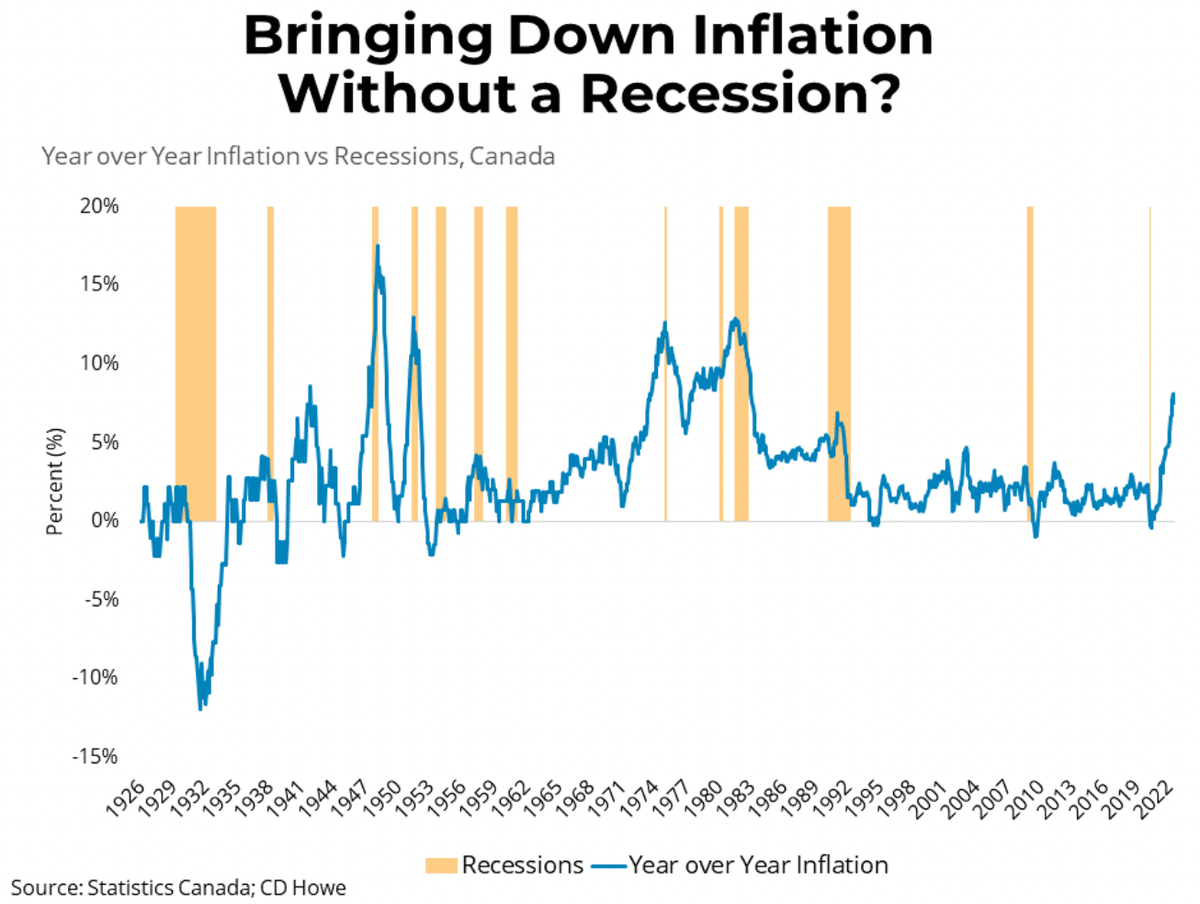