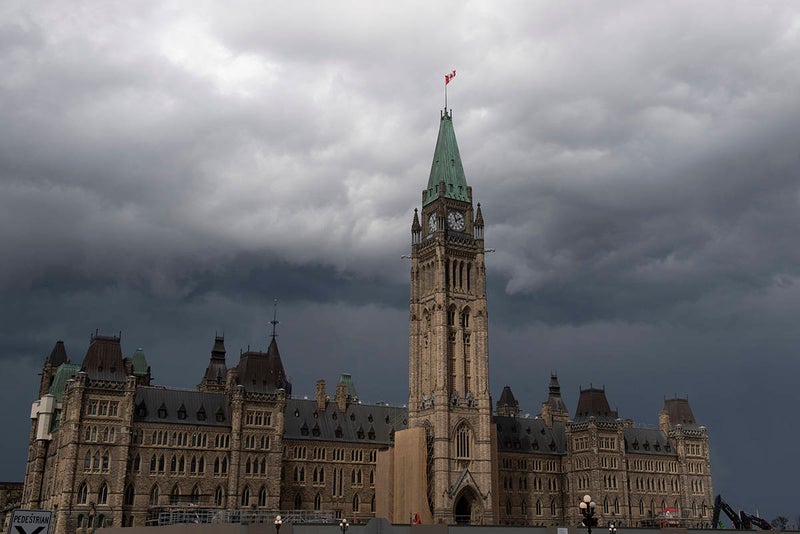 Finance Minister Chrystia Freeland extolled the performance of the Canadian economy in response to the extraordinary support provided by the federal fiscal authorities and the Bank of Canada in the past 21 months. The economic recovery has been the second strongest in the g-7, and the death rate from Covid-19 was the second-lowest. Emergency spending by the federal government was enormous, but the federal government maintained its triple-A credit rating. The Canadian government on Tuesday cut its deficit forecast for the current fiscal year, citing higher tax revenues and less emergency aid spending while earmarking new funds to fight the Omicron coronavirus variant.

"As we look ahead, we are mindful of elevated inflation,"

Freeland said in the forward of the update.

"We know inflation is a global phenomenon driven by the unprecedented challenge of re-opening the world's economy. Turning on the global economy is a good deal more complicated than turning it off. We, like other countries, are experiencing the consequences of a time unlike any other."

Here are some of the key forecasts presented in the fiscal update:

The budget deficit came in at $327.7 billion in the last fiscal year (FY) 2020-21--almost $27 billion less than forecast in the spring budget. As it turns out, revenue came in $20 billion stronger than expected, while expenses were $6 billion lower than expected.
This year's red ink is expected to be $144.5 billion versus the $154.7 billion forecast in April.
Canada's debt-to-GDP ratio at 47.5% last FY will peak at 48% this FY versus 51.2% expected in April and fall subsequently to 44% in FY 2026-27. This compares to the pre-pandemic levels of roughly 31%.
"It has been a hard 21 months," said Freeland. "As we brace ourselves for the rising wave of Omicron, we know that no one wants to endure new lockdowns," Finance Minister Chrystia Freeland said in prepared remarks.

The Trudeau Liberals are pointing to improvements in the labour market, personal incomes and corporate profits as it forecasts tens of billions of dollars in additional revenue annually through 2026.

There is $13 billion in additional spending since the budget aimed at "finishing the fight against COVID-19" and another $4.5 billion in provisions for any Omicron response this fiscal year. There is $1.7 billion for rapid COVID tests in the fiscal update and $2 billion for COVID therapeutics and treatments. In a nod to the persistence of COVID, the previously announced extensions of the wage, rent and recovery benefits in the fall will put another $6.7 billion on the COVID tab this fiscal year.

When it comes to feeding Canada's economic growth in the years to come, Ottawa is touting the importance of immigration to address labour shortages. The fiscal update earmarks $85 million in the 2022-23 fiscal year to speed up the application process to bring in workers for key industries hit by labour shortage coming out of the pandemic.

The "Underused Housing Tax Budget 2021" announced the government's intention to implement a national, annual 1.0% tax on the value of non-resident, non-Canadian-owned residential real estate in Canada that is considered vacant or underused. It is proposed that the tax be effective for the 2022 calendar year.
Bottom Line
Today's fiscal update document may well be most notable in what it omitted. There was no mention of the many new spending promises marked in the summer's Liberal election platform. Those promises added up to $78 billion over five years.

The Opposition parties in the House of Commons harped on rising inflation and its negative impact on Canadian households and businesses. To be sure, the Trudeau government is not responsible for the surge in global inflation arising from the supply disruptions, labour shortages and enormous pent-up demand. Still, with the Bank of Canada poised for rate hikes next year, the Liberals could well be accused of stoking inflation with additional fiscal stimulus. We will undoubtedly hear more on the election promises when the government's 2022 budget is announced, likely sometime this spring.