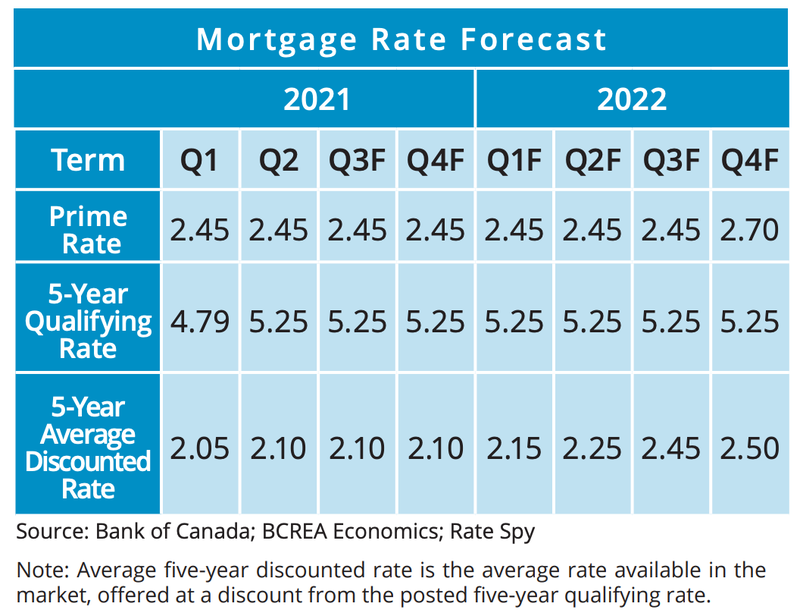 It was another quiet quarter in the Canadian mortgage market. Canadian five-year fixed rates moved essentially sideways over the summer as optimism about the end of the pandemic faded under the weight of a fourth wave of cases. Canadian economic growth remains strong, if uneven, and inflation continues to be elevated. However, global financial market attention has entirely shifted from concerns over rising inflation to fears over the impact of the delta variant of COVID-19. Indeed, rising cases across G7 countries has prompted a retracing of bond yields with the Canadian five-year Government of Canada bond falling from about 1 per cent in June to 0.8 per cent in September. That decline in bond yields prompted a modest five basis point cut in mortgage rates by major Canadian lenders. 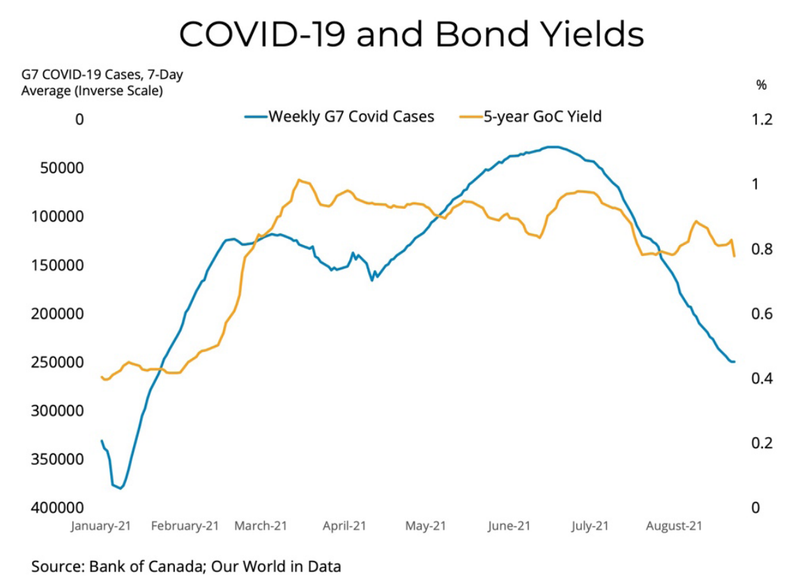 Given that the direction of interest rates is being determined by epidemiologic factors rather than macroeconomics, it
is difficult to forecast with any certainty. It is perhaps more likely in the short-term that five-year fixed rates will decline further, at least until we are past this most recent uptick in COVID-19 cases. Once normal macroeconomic drivers again take precedence in determining mortgage rates, whenever that might be, we expect fixed rates to gradually rise back to pre-pandemic levels while variable rates follow the Bank of Canada’s timetable. That means a fixed five-year rate of 2.1 per cent for the remainder of this year, along with a 1.5 per cent variable rate available through 2022.
Economic Outlook 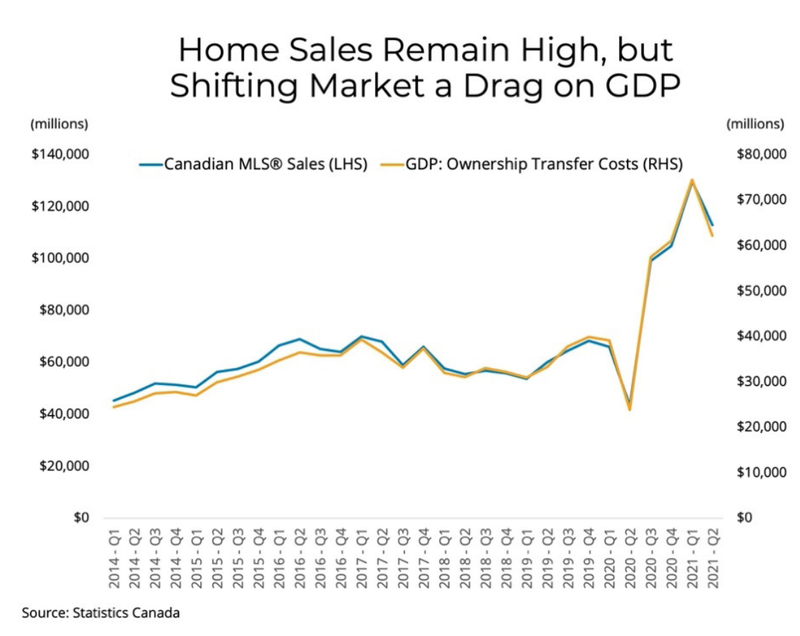 The Canadian economy contracted in the second quarter with output falling 1.1 per cent on an annualized basis. That
decline follows three prior quarters of very strong growth. Most of the decline in real GDP was driven by slowing home
sales and lower exports. After rising to record levels, home sales activity across the country has moderated. However,
the downshift from record activity to lower, but still strong sales was significant enough to negatively impact economic
growth. That shift in the housing market was compounded by lower exports, which fell 4 per cent largely due to supply
chain disruptions, as well as flat household spending due to COVID-19 restrictions put in place in the second quarter in
large eastern provinces. Household incomes grew 2.2 per cent in the second quarter, well outpacing just 0.7 per cent growth in spending. As a result, the Canadian savings rate remains in double digits for the fifth straight quarter. The eventual spending of at least some of the accumulated savings across the Canadian economy will be a key determinant of how the recovery unfolds from here.
Most of the factors that led to a decline in GDP over the second quarter were either one-time changes or due to what should be temporary supply chain disruptions. Data for June showed strong growth, but the pace of the recovery remains uncertain due to the pandemic and especially the Delta variant-driven rise in cases around the country. We anticipate that some of the expected acceleration of economic growth may now be pushed into the fourth quarter of 2021 and the first half of 2022.

Inflation continues to run ahead of the Bank of Canada’s 2 per cent target. The driving force behind rising prices is still isolated to a few categories of spending. In particular, the rising price of gasoline and the run-up in Canadian home prices since last year. Home prices in Canada are beginning to flatten out, which should mean a fading impact on inflation over the next year. Likewise, the impact of gas prices should continue to decline as base-year effects have less influence. Other issues putting upward pressure on consumer prices are being driven by bottlenecks and supply shortages – which are issues that monetary policy cannot address. Higher interest rates may stifle demand, but they do not fix microchip shortages. 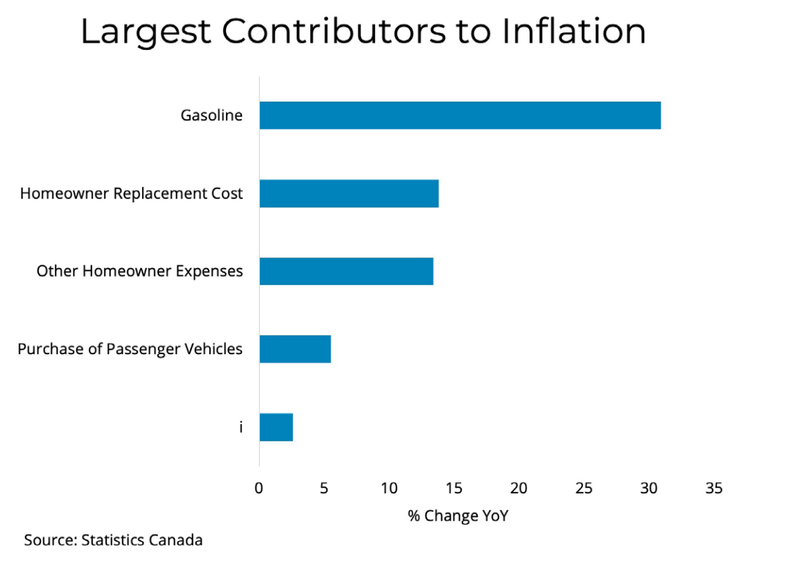 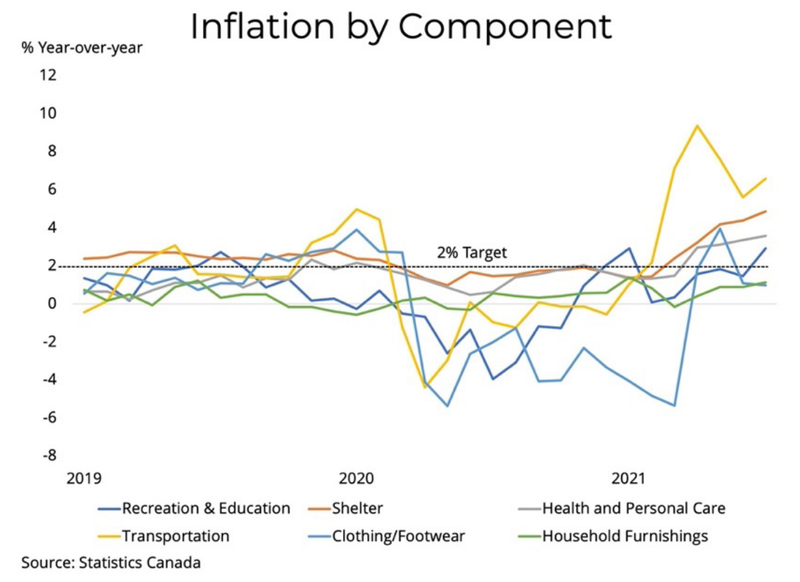 We expect the Bank of Canada will proceed with caution, especially given the fourth wave of COVID-19. The unexpected contraction of GDP in the second quarter pushes out the closing of the output gap by one or two quarters. That likely means a new timeline for the Bank of Canada to raise its policy rate with the earlier increase coming in mid-2023.
Source - BCREA
NAVIGATEHOME / DOWNTOWN / NEWS / ABOUT / CONTACT
ABOUTThe Place Real Estate Team has an extensive team of some of Vancouver’s best real estate agents working on your behalf. In addition, our administration and conveyance staff work tirelessly behind the scenes to ensure your purchase or sale goes without a hitch.Our web team are working around the clock and across the globe to ensure you have access to one of the best real estate search engines in Vancouver, and your property is being marketed online to reach the maximum possible audience.
Vancouver East Homes For Sale - Vancouver East Condos For Sale
Vancouver West Homes For
Sale -
Vancouver West Condos For Sale
Sitemap - Main - Properties