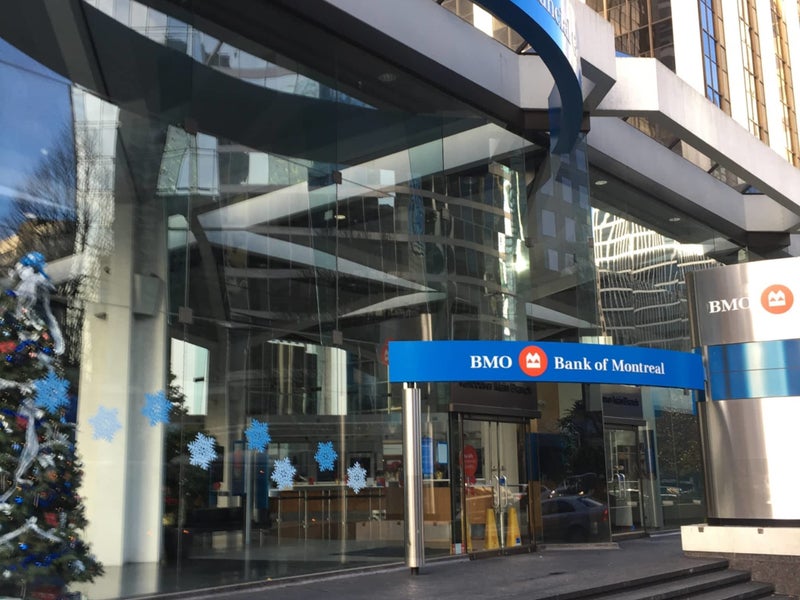 This morning's Stats Canada release showed that the July CPI surged to a 3.7% year-over-year pace, well above the 3.1% pace recorded in June. This is now the fourth consecutive month in which inflation is above the1% to 3% target band of the Bank of Canada. And given the flash election, opposition parties are already making hay. “The numbers released today make it clear that under Justin Trudeau, Canadians are experiencing a cost of living crisis,” Conservative Leader Erin O’Toole said in a statement. He went on to suggest that the Liberal government is stoking inflation with its debt-financed government spending programs.

While it is true that deficit spending has surged during the pandemic, the same is also true for nearly every country in the world. Moreover, accelerating inflation is a global phenomenon and most central banks believe it to be temporary. Certainly, Tiff Macklem is firmly of that view, as is the Fed Chair Jerome Powell.

Supply disruptions and base effects have largely caused the rise in inflation. Semiconductor production, for example, slumped during the 2020 lockdowns, and then couldn’t be ramped up fast enough when demand for cars and electronics returned, leading the prices of new and used autos to rise at a record pace. Prices for airfares and hotel stays also jumped. Companies found themselves short of workers as they reopened, leading some to offer bonuses or boost wages and subsequently raise prices for consumers.
Central bankers believe that the price pressures are transitory, representing temporary shocks associated with the reopening of the economy. Lumber prices, for example, spiked when demand for new homes returned and have since normalized (see the chart below). To be sure, above-target inflation has heightened uncertainty. The central banks do not want to choke off the economic recovery through misplaced inflation fears. Many Canadians remain out of work, and long-term unemployment is still very high. Moreover, the recent surge of the delta variant proves that the recovery is uncertain. 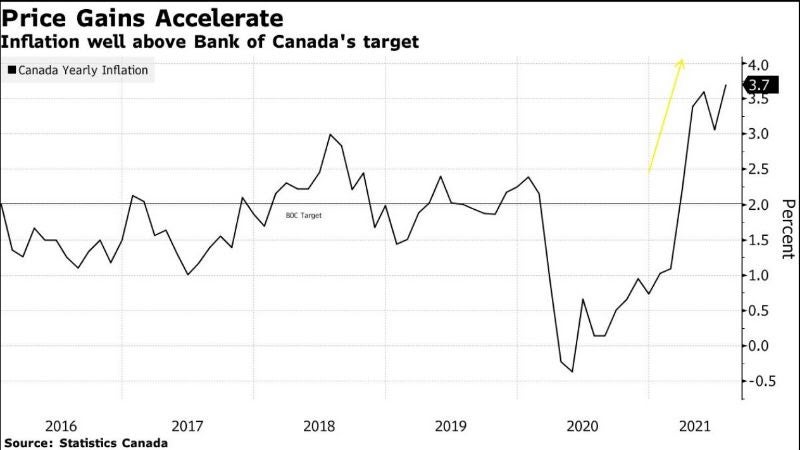 Governor Tiff Macklem, whose latest forecasts show inflation creeping up to 3.9% in the third quarter before easing at the end of the year, has warned against overreacting to the “temporary” spike.

Prices rose faster year over year in six of the eight major components of Canadian inflation in July, with shelter prices contributing the most to the all-items increase. Conversely, prices for clothing and footwear and alcoholic beverages, tobacco products and recreational cannabis slowed on a year-over-year basis in July compared with June.

Year over year, gasoline prices rose less in July (+30.9%) than in June (+32.0%). A base-year effect continued to impact the gasoline index, as prices in July 2020 increased 4.4% on a month-over-month basis when many businesses and services reopened.

In July 2021, gasoline prices increased 3.5% month over month, as oil production by OPEC+ (countries from the Organization of Petroleum Exporting Countries Plus) remained below pre-pandemic levels though global demand increased.

The homeowners' replacement cost index, which is related to the price of new homes, continued to trend upward, rising 13.8% year over year in July, the largest yearly increase since October 1987.

Similarly, the other owned accommodation expenses index, which includes commission fees on the sale of real estate, was up 13.4% year over year in July. 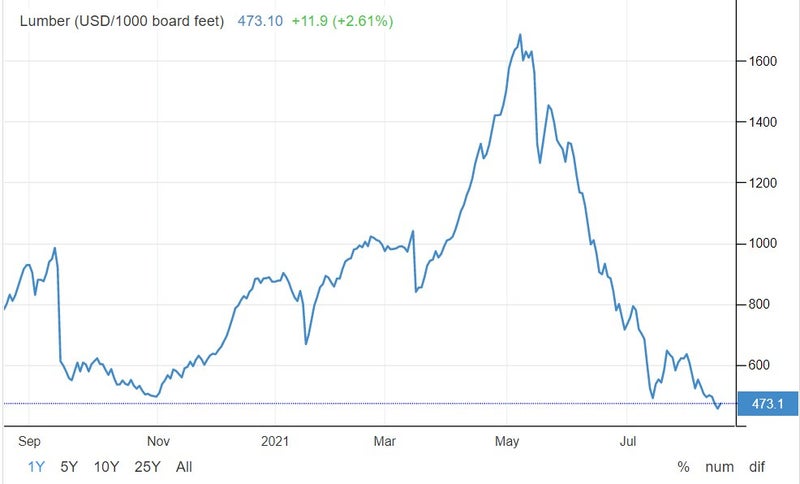 Year-over-year price growth for goods rose at a faster pace in July (+5.0%) than in June (+4.5%), with durable goods (+5.0%) accelerating the most. The purchase of passenger vehicles index contributed the most to the increase, rising 5.5% year over year in July. The gain was partially attributable to the global shortage of semiconductor chips.
Prices for upholstered furniture rose 13.4% year over year in July, largely due to lower supply and higher input costs.

The average of core inflation readings, a better gauge of underlying price pressures, rose to 2.47% in July, the highest since 2009.

Monthly, prices rose 0.6% versus a consensus estimate of 0.3%. Rising costs to own a home are one of the biggest contributors to the elevated inflation rate, following a surge in real-estate prices over the past year.

Today's inflation data likely did little to alter the Bank of Canada's view that above-target inflation will be a transitory phenomenon. They are already ahead of most central banks in tapering the stimulus coming from quantitative easing. They do not expect to start increasing interest rates until the labour markets have returned to full employment, which they judge to occur in the second half of 2022. In the meantime, pent-up demand in Canada is huge as people tap into their involuntary savings during the lockdown to pay higher prices at restaurants, grocery stores and gas stations. Financial markets appear to be sanguine about the prospect for rate hikes, as bond yields have been trading in a very narrow range.
Source - Dr. Sherry Cooper
NAVIGATEHOME / DOWNTOWN / NEWS / ABOUT / CONTACT
ABOUTThe Place Real Estate Team has an extensive team of some of Vancouver’s best real estate agents working on your behalf. In addition, our administration and conveyance staff work tirelessly behind the scenes to ensure your purchase or sale goes without a hitch.Our web team are working around the clock and across the globe to ensure you have access to one of the best real estate search engines in Vancouver, and your property is being marketed online to reach the maximum possible audience.
Vancouver East Homes For Sale - Vancouver East Condos For Sale
Vancouver West Homes For
Sale -
Vancouver West Condos For Sale
Sitemap - Main - Properties