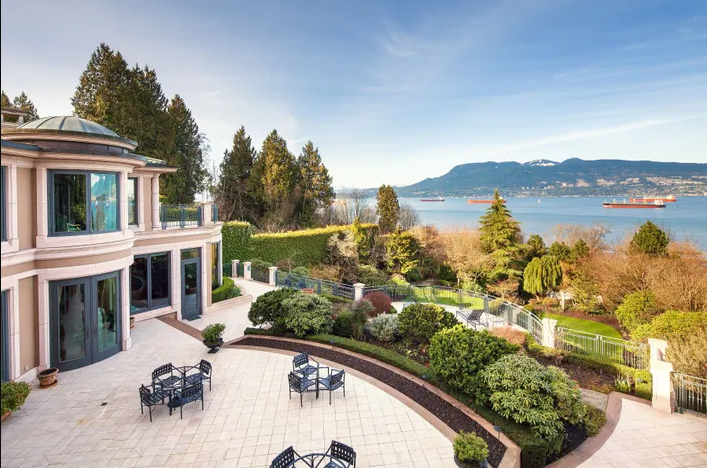 Housing Continued to Surge in January

The seasonally adjusted activity was running at an annualized pace of 736,452 units in January, significantly above CREA’s current 2021 forecast for 583,635 home sales this year. Sales will be hard-pressed to maintain current activity levels in the busier months to come, absent a surge of much-needed new supply; However, that could materialize as current COVID-19 restrictions are increasingly eased and the weather starts to improve.

A mixed bag of gains led to the month-over-month increase in national sales activity from December to January, including Edmonton, the Greater Toronto Area (GTA), and Chilliwack B.C., Calgary, Montreal and Winnipeg. There was more of a pattern to the declines in January. Many of those were in Ontario markets, following predictions that sales in that part of the country might dip to start the year with so little inventory currently available and many of this year’s sellers likely to remain on the sidelines until spring.

Actual (not seasonally adjusted) sales activity posted a 35.2% y-o-y gain in January. In line with activity since last summer, it was a new record for January by a considerable margin. For the seventh straight month, sales activity was up in almost all Canadian housing markets compared to the same month the previous year. Among the 11 markets that posted year-over-year sales declines, nine were in Ontario, where supply is extremely limited at the moment.

CREA Chair Costa Poulopoulos said, “The two big challenges facing housing markets this year are the same ones we were facing last year – COVID and a lack of supply. It’s looking like our collective efforts to bring those COVID cases down over the last month and a half are working. With luck, some potential sellers who balked at wading into the market last year will feel more comfortable listing this year.” 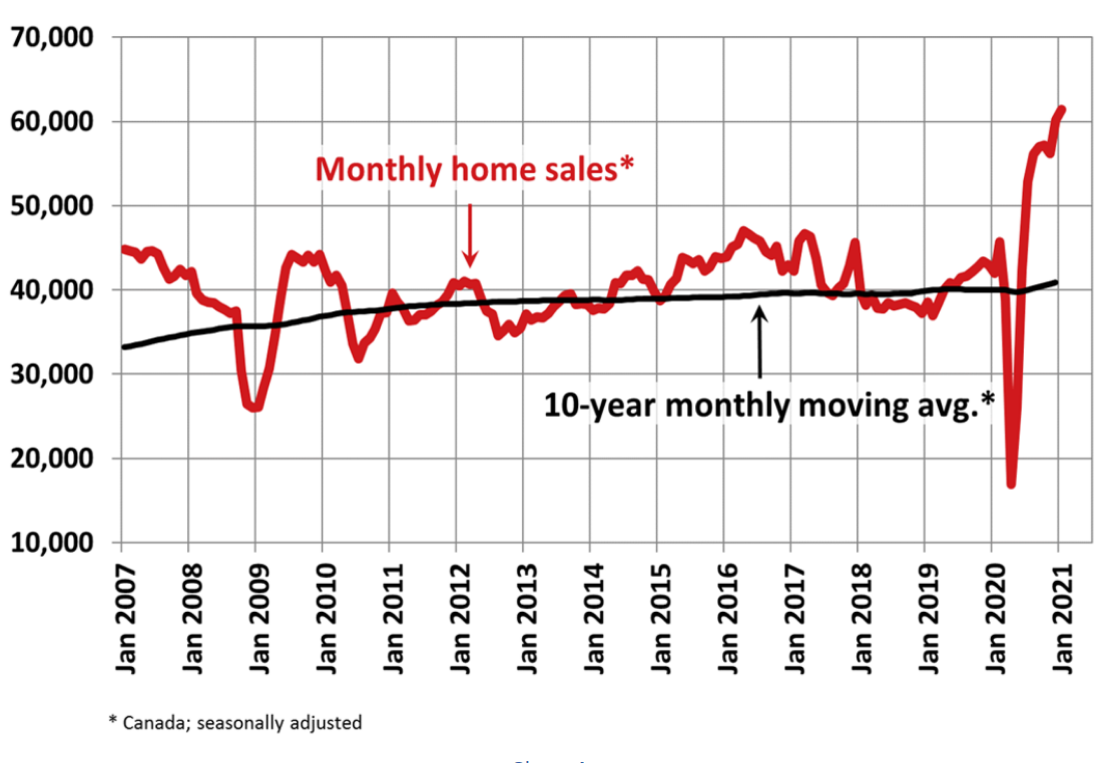 The dearth of new listings continues to be the biggest problem in the housing market. As we move into the spring market and continue to see fewer COVID cases, the likelihood is that new supply will emerge. But for now, the number of newly listed homes plunged 13.3% in January, led by double-digit declines in the GTA, Hamilton-Burlington, London and St. Thomas, Ottawa, Montreal, Quebec and Halifax Dartmouth.

Based on a comparison of sales-to-new listings ratio with long-term averages, only about 20% of all local markets were in balanced market territory in January, measured as being within one standard deviation of their long-term average. The other 80% were above long-term norms, in many cases well above. This was a record for the number of markets in seller’s market territory.

Low available supply is the reason property values will continue to go up. Strong demand pre-pandemic and the historic market rally since summer have cleaned up inventories in many parts of the country. Relative to the 10-year average, active listings had plummeted between 50% and 61% in Ontario, Quebec and most of Atlantic Canada, and 29% in BC by the late stages of 2020. And that’s despite a surge in downtown condo listings since spring in Canada’s largest cities. With so few options to choose from (outside downtown condos), buyers will continue to compete fiercely. Buyers in the Prairie Provinces, and Newfoundland and Labrador, however, will feel less pressure to outbid each other given supply isn’t quite as scarce in these markets.

Viewed from another angle, sellers enter 2021 holding a powerful hand when setting prices in most of Canada. We see this continuing during most of 2021. We expect provincial sales-to-new listings ratios—a reliable gauge of price pressure—to generally stay above the threshold (0.60) where sellers have historically yielded more pricing power. In several cases (including BC, Ontario and Quebec), ratios are well above the threshold, providing plenty of buffer against demand-supply conditions flipping in favour of buyers.

The non-seasonally adjusted Aggregate Composite MLS® HPI was up 13.5% on a y-o-y basis in January – the biggest gain since June 2017.

The largest y-o-y gains – above 30% – were recorded in the Lakelands region of Ontario cottage country, Northumberland Hills, Quinte & District, Tillsonburg District and Woodstock-Ingersoll.

Y-o-y price gains followed this in the range of 20-25% in Hamilton, Guelph, Oakville-Milton, Bancroft and Area, Brantford, Cambridge, Kitchener-Waterloo, Peterborough and the Kawarthas, Ottawa and Greater Moncton.

Prices were up 16.6% compared to last January in Montreal. Meanwhile, y-o-y price gains were in the 10-15% range on Vancouver Island, Chilliwack, the Okanagan Valley, Winnipeg, the GTA and Mississauga. Prices rose in the 5-10% range in Victoria, Greater Vancouver, Regina and Saskatoon. Home prices were up 2% and 2.2% in Calgary and Edmonton, respectively. 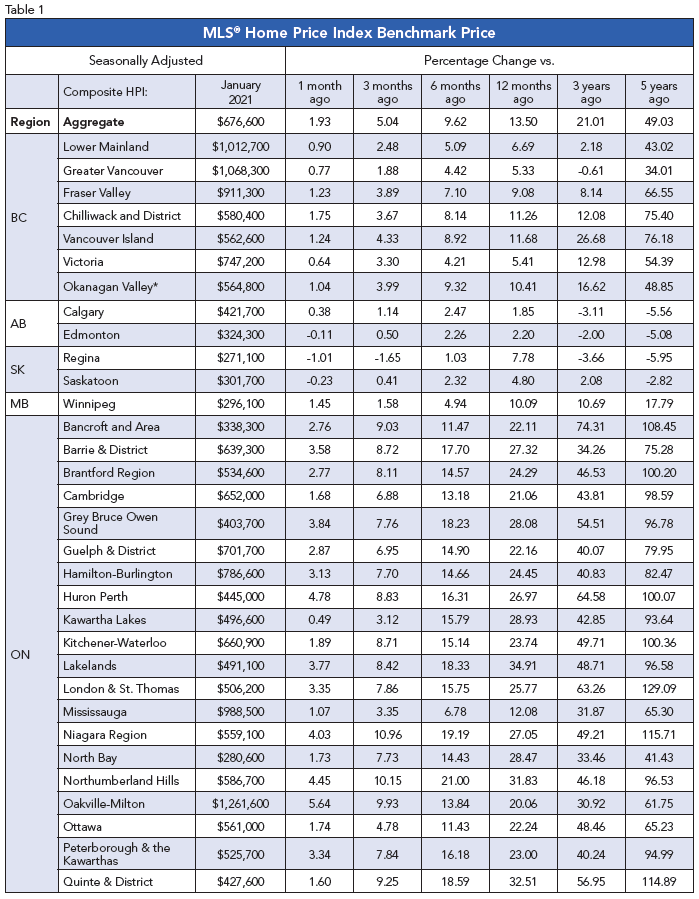 The rollercoaster that was 2020 left Canada’s housing market more or less where it started the year: full of bidding wars, escalating prices and exasperated buyers unable to find a home they can afford. The pandemic changed some dynamics—it drove many buyers to the suburbs, exurbs and beyond, ground immigration to a virtual halt, triggered a downturn in big cities’ rental markets and caused households to build up their savings—but it didn’t dial down the market’s heat.

The marked shift in housing strength from urban centres–Toronto, Vancouver, Montreal–to perimeter cities is ongoing. For example, Toronto’s prices are up ‘only’ 11.9% y-o-y, but Barrie (+27%) and London (26%) have far outpaced these gains.

Condo price growth has slowed to just 3.1% y-o-y, or a record 14.3 percentage points below the price gains in single-detached homes. That’s by far the widest gap in 20 years and reflects the hunt for space and social distancing.

Housing starts (reported yesterday by CMHC) surged to 282,428 annualized units in January, the second-highest monthly posting since 1990. This figure could be distorted upward by the unseasonably mild January weather in much of the country. But the new high in starts is in line with record sales and solid building permits.

For policymakers, it doesn’t appear that there’s much interest in leaning against a sector that is helping to prop up the economy, especially with years of tightening mortgage rules already in place.

There appears to be little on the horizon to stop sales or prices from reaching new heights in 2021. Yet, cooling signs will emerge as the year progresses, which will come into fuller view next year. The foremost restraining factors will be a rise in new listings, waning pandemic-induced market churn, a modest creep-up in interest rates and an erosion of affordability. Call it a 2022 soft landing.
Source - Dr. Sherry Cooper - Dominion Lending Centers
NAVIGATEHOME / DOWNTOWN / NEWS / ABOUT / CONTACT
ABOUTThe Place Real Estate Team has an extensive team of some of Vancouver’s best real estate agents working on your behalf. In addition, our administration and conveyance staff work tirelessly behind the scenes to ensure your purchase or sale goes without a hitch.Our web team are working around the clock and across the globe to ensure you have access to one of the best real estate search engines in Vancouver, and your property is being marketed online to reach the maximum possible audience.
Vancouver East Homes For Sale - Vancouver East Condos For Sale
Vancouver West Homes For
Sale -
Vancouver West Condos For Sale
Sitemap - Main - Properties