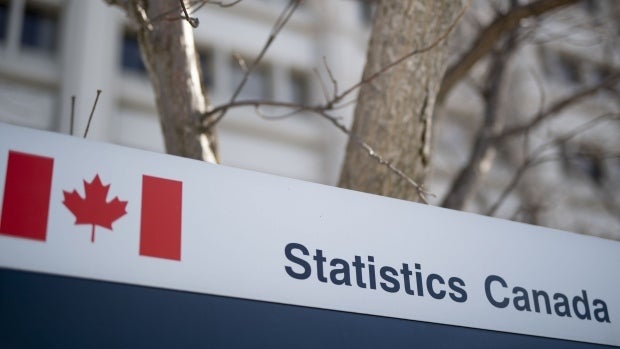 The October Labour Force Survey, released this morning by Stats Canada, showed an employment increase of 83,600--well below the 378,000 gain in September and average monthly gains of 395,000 over the past six months (see chart below). Several provinces tightened public health restrictions last month in response to a spike in COVID-19 cases. These measures were targeted at indoor restaurants and bars, and gyms.

Most of the job gains last month were in full-time work. Among those who worked at least half their usual hours, the number working from home increased by 150,000. Working remotely continues to be an important adaptation to COVID-19 health risks, with 2.4 million Canadians who do not normally work from home doing so in October.

Long-term joblessness—defined as unemployed and looking for work or temporary layoff for 27 weeks or more— increased again in October. Not surprisingly, more than half (53.3%) of the long-term unemployed were living in a household reporting difficulty meeting necessary expenses. As of October, the long-term unemployed totalled 448,000, or one-quarter of all unemployed people. September and October increases in long-term unemployment are by far the sharpest recorded since comparable data became available in 1976.

Employment increased in the wholesale and retail trade industries in Ontario, two sectors largely unaffected by new COVID-19 restrictions. After five months of gains totalling 154,000, employment in Ontario's accommodation and food services was virtually unchanged in the month and remained 15.7% below its pre-COVID February level. Employment declined in transportation and warehousing.

Following five consecutive months of gains, employment was little changed in Quebec in October, and the unemployment rate edged up 0.3 percentage points to 7.7%. Employment gains spread across several services-producing industries were partly offset by a drop of 42,000 in the accommodation and food services industry. The public health alert level in Montréal and Québec City was raised to "red" on October 1, which led to the closure of indoor restaurants and many cultural facilities. Travel between regions in the province was also discouraged. Over the subsequent two weeks, several other Quebec regions went to red alert, and additional measures were introduced.

Employment Grows in Alberta and BC

In Alberta, employment rose by 23,000 (+1.1%), the fifth increase in six months. Following large employment losses earlier this year, Calgary has posted four consecutive employment gains since summer, totalling 101,000 (+13.6%). Recent employment increases in Edmonton have been more modest, up 60,000 (+9.0%) since summer.

October employment gains in Alberta were spread across several industries, including healthcare and social assistance, transportation and warehousing, and wholesale and retail trade. Employment in natural resources edged up in the month but was down 5.2% on a year-over-year basis.

Hard-Hit Sectors of the Economy

The accommodation and food services industry were most directly affected by the recent tightening of public health measures—and, for the first time since April, employment declined in this industry in October. Employment in the arts, entertainment, and recreation sectors was farther from pre-COVID levels than any other sector in August. The next few months will shed light on the impact of public health restrictions on employment in this sector, which, like the accommodation and food services industry, has strong ties to travel and tourism.

With restrictions on travel and gathering still in place, the continuing impact of COVID-19 has been much more significant for the transportation of people than of goods. For example, the August Survey of Employment, Payrolls and Hours found that payroll employment in transit and ground passenger transportation was down by 17.8% from February to August, while payroll employment in truck transportation—primarily for goods—was down 7.9% for the same period. Similarly, in August, major Canadian airlines carried 86.8% fewer passengers than 12 months earlier, and Canadian railways carried 14.7% less freight.
In construction, employment was little changed for the third consecutive month in October, following increases totalling 190,000 (+16.2%) from April to July. Employment in construction was 7.5% (-112,000) below its February level in October. Recent data on housing starts showed a decline of 5.0% from September 2019 to September 2020, following two months of strong year-over-year increases.

Following a pause in September, employment growth resumed in retail trade, rising by 31,000 (+1.4%) in October, with most of the increase in Ontario. From February to April, employment declined by over one-fifth (-22.9%; -517,000) due to retail businesses' closures during the first wave of COVID-19. In October, public health measures associated with the second wave did not include retail businesses' requirements to close. Employment in this industry was 5.1% (-115,000) below its pre-COVID level and down by 2.4% (-54,000) compared with October 2019.

In wholesale trade, employment increased by 15,000 (+2.3%) in October, driven by Alberta increases. Employment in this industry was 5.6% (+35,000) above its February level. The wholesale trade release's latest results show that sales increased for the fourth consecutive month in August and were 1.7% above pre-COVID-19 levels.

Employment rose for the fourth consecutive month in professional, scientific and technical services, up 42,000 (+2.7%) in October and led by Ontario (+23,000). With this gain, this industry's employment was 3.3% (+51,000) higher than its pre-COVID level. Job security among employees in this industry includes computer systems design and related services; architecture, engineering and related services; and legal services tend to be higher than in other industries.

Employment was little changed in educational services in October but exceeded its February level by 2.8% (+39,000). Compared with October 2019, employment in this industry increased by 32,000, in part a reflection of some jurisdictions increasing staffing levels to support classroom adaptations brought on by COVID-19.

Compared with other industries, a relatively high share of workers in educational services (25.8% in 2019) is temporary employees, reflecting the relatively high prevalence of teaching staff hired on a contract basis. While the number of temporary employees decreased markedly following the initial COVID-19 economic shutdown, it had rebounded in October (little changed on a year-over-year basis, not seasonally adjusted), helping to boost overall employment in the industry. Permanent employees in educational services also contributed to the recovery of this industry on a year-over-year basis. In October, the number of permanent employees was up 5.6% compared with 12 months earlier (not seasonally adjusted). 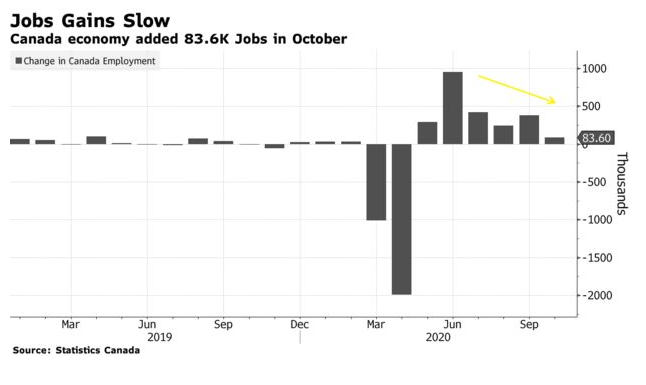 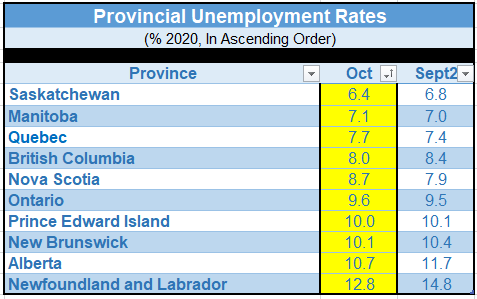 The economic recovery remains dependent on the evolution of the pandemic. It is likely that extensive lockdown measures, such as the widespread closures imposed early in the pandemic, will not be reintroduced. However, more localized and moderate containment measures will ebb and flow. The Bank of Canada suggests that vaccines and effective treatments will be widely available by mid-2022, at which time the direct effects of the pandemic on economic activity will have ended. However, households' precautionary behaviour and the effects of the uncertainty surrounding COVID-19 are likely to linger.

The pandemic is also likely to have persistent effects on the preferences and behaviours of consumers and businesses. This could lead to lasting changes to the economy's structure and could weigh on its potential output. The sizes and timing of such effects are difficult to estimate precisely. Given these considerations, the outlook for Canadian and global economic activity remains unusually uncertain.

The regional real estate boards in Vancouver, Toronto and Montreal recently released their October housing reports showing continued sales activity and upward price prices except in the condo space, particularly smaller condos that were bought on spec for the rental market. With the nosedive in tourism, the short-term rental market has collapsed. Many of these former Airbnb properties are either for sale or have moved into the long-term rental space, driving down prices. The dearth of immigration this year has also exacerbated the decline in rent. Condo listings are rising faster than sales in many regions. In contrast, lower rise properties remain in very tight supply, and prices continue to rise. We will provide more details on housing trends with the release of the CREA data late next week.
Source - Dr Sherry Cooper - Dominion Lending