Is It Different This Time? Recessions and the BC Housing Market 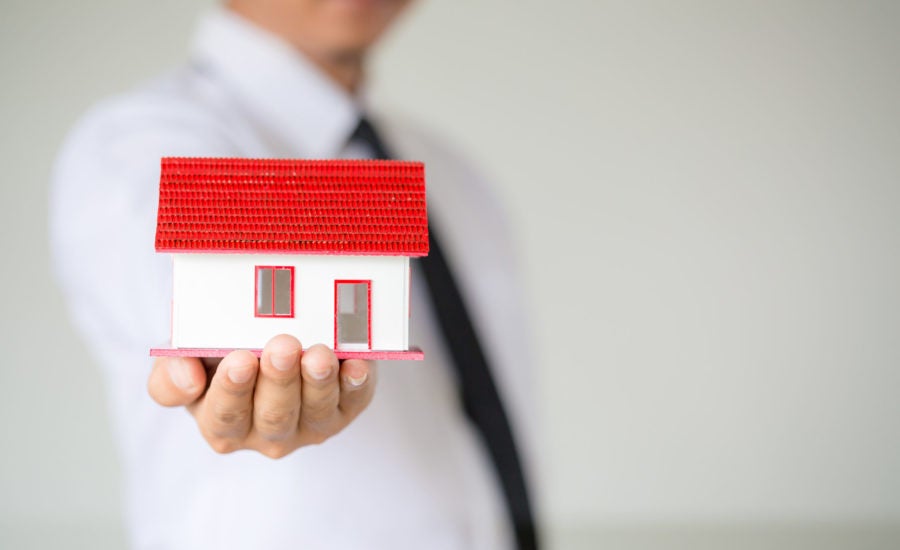 Summary Findings:
• The 2020 COVID-19 driven recession will be deep, though the duration may be shorter than past recessions
• We expect that home sales will post an initial sharp decline as households and the real estate sector adhere to social distancing
• As measures implemented to mitigate the spread of COVID-19 are gradually lifted, we expect that low interest rates and pent-up demand will translate to a significant recovery in home sales and prices
The Canadian economy has weathered three recessions in the past 40 years, each unique in cause, depth and duration. However, there is considerable similarity in how the BC housing market has both endured and recovered from those recessions.
In this market intelligence, we examine the impact of past recessions on the BC housing market and provide preliminary projections on how COVID-19 may impact provincial home sales and prices over the next 24 months.
The 2020 Recession – How bad and how long?
The 2020 recession likely began in February, meaning it is still in its very early stages. Since 1980, the average Canadian recession has lasted between 8 and 25 months and is characterized by a contraction of about 4 per cent in real GDP and a jump in the unemployment rate of 4.5 percentage points.
Provincial economic data is only available annually, making it much harder to track the duration of recessions. We know that during the 1981/82 recession, the BC economy contracted by 6.4 per cent, and the unemployment rate jumped nearly 10 points in the worst recession on record for British Columbia. The provincial economy performed much better in the 1990-92 recession, with real GDP eking out meager growth over that period, though the provincial unemployment rate did spike to nearly 11 per cent. During the 2008- 09 Financial Crisis and recession, we estimate the BC economy peaked in November of 2008 and contracted 3.7 per cent over the following 12 months while the unemployment rate rose more than 4 points.
Historical Recessions: Canada and BC 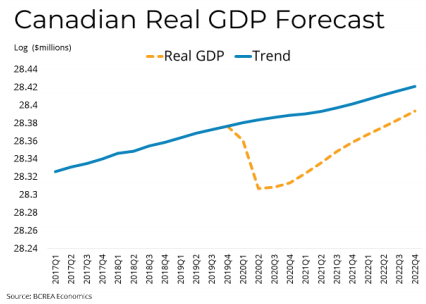 Our current forecast is for the Canadian economy to contract approximately 4 per cent in the first quarter of 2020, followed by a startling 21 per cent decline in the second quarter on a seasonally adjusted annualized basis (on a
non-annualized basis, the second quarter decline is roughly 5 per cent). The peak-to-trough decline in total Canadian output will likely be on the order of about 7 per cent before the economy starts to grow again.
Likewise, our tracking of the BC economy indicates that provincial real GDP growth will turn negative in February and the contraction of the economy may reach double digits by April, reflecting the shutdown in economic activity. The COVID-19 recession is unprecedented in that it is not man-made. It did not evolve due to collective poor business
decisions, bad loans, or misadventures in financial engineering. Rather, the economy has been purposely halted for the
greater good. The implication being that, the shorter the duration of this unusual period, the more likely it is that demand can snap back to near where it was pre-COVID-19. However, the longer the duration, the more likely that jobs do not return, businesses fail, and the recovery is much slower.
While a recession looks to be unavoidable, the country has already experienced staggering job losses in March and, just as there are necessary measures to flatten the curve of COVID-19, we can also implement measures to flatten the recession curve. Fortunately, Canadian policy makers are following the playbook to do just that. If these policies are
working, we expect the pace of job losses to slow considerably, and the number of EI claims and business failures to decline.
COVID-19, Past Recessions and the BC Housing Market
In past recessions, BC home sales typically posted an initial steep decline before bouncing back along with the wider 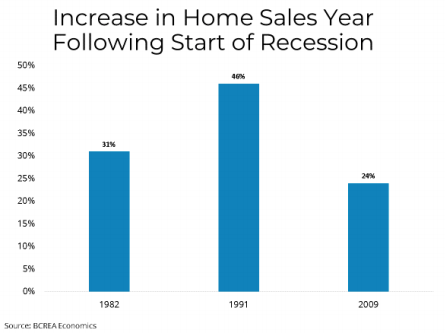 economy. In the year following the start of a recession, home sales have recorded significant recoveries, rising 24 to 46 per cent, largely as a result of pentup demand and low interest rates.
In the COVID-19 recession, we expect home sales will decline approximately 30-40 per cent year-over-year in April 2020 and remain depressed over the summer as households and the real estate sector adhere to social distancing. As measures to mitigate the spread of COVID-19 are gradually lifted, we expect that pent-up demand and low interest rates will entice buyers back into the market. We project home sales will return to a baseline 85,000-unit annual pace by early 2021. 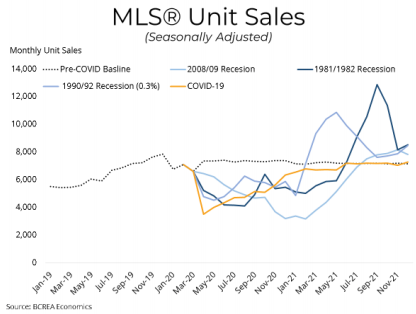 The response of home prices to prior recessions was broadly similar to that of home sales, with average home prices initially declining before springing back as the Bank of Canada lowers interest rates, and pent-up demand builds. Those factors are often powerful enough that home prices finish the year higher following the initial decline. The one clear outlier is the 1981/82 recession in which prices were crashing following a 41 per cent increase the year prior and an increase in mortgage rates to a now unimaginable 22 per cent.
Crucially, the impact on prices is largely determined by the reaction of supply. If the inventory of listings accumulates significantly, and particularly if that inventory represents foreclosures or desperation selling by those impacted by rising unemployment, then prices will be more severely impacted. 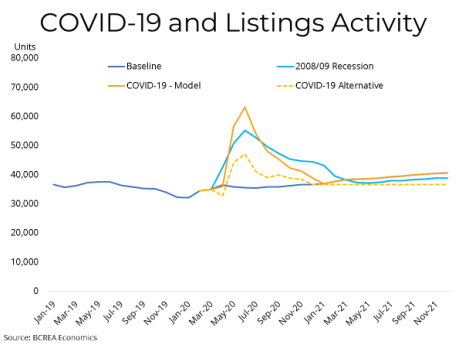 Our COVID-19 model assumes that listings accumulate as in past recessions. However, given the unusual nature of COVID-19, listings are likely to decline for at least the first month due to social distancing before normal recession dynamics take over and listings begin to rise. That alternative scenario is represented by the broken line in the adjacent chart.
Conclusions
While a recession in Canada and BC is at this point unavoidable, the one thing all recessions have in common is that they end. We know from history that the housing market bounces back with vigor following recessions, usually aided by a steep drop in interest rates. We expect this time around will be no different. Given historically low interest rates and pent-up demand, we expect the impact of this recession will evolve as in the past, with home sales and prices recovering into 2021. 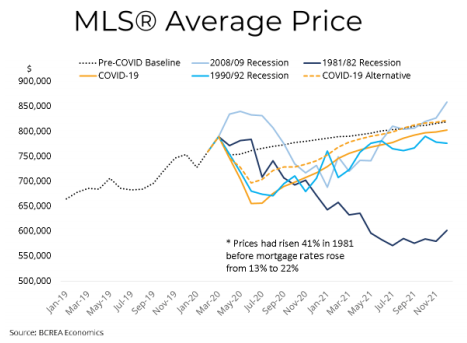